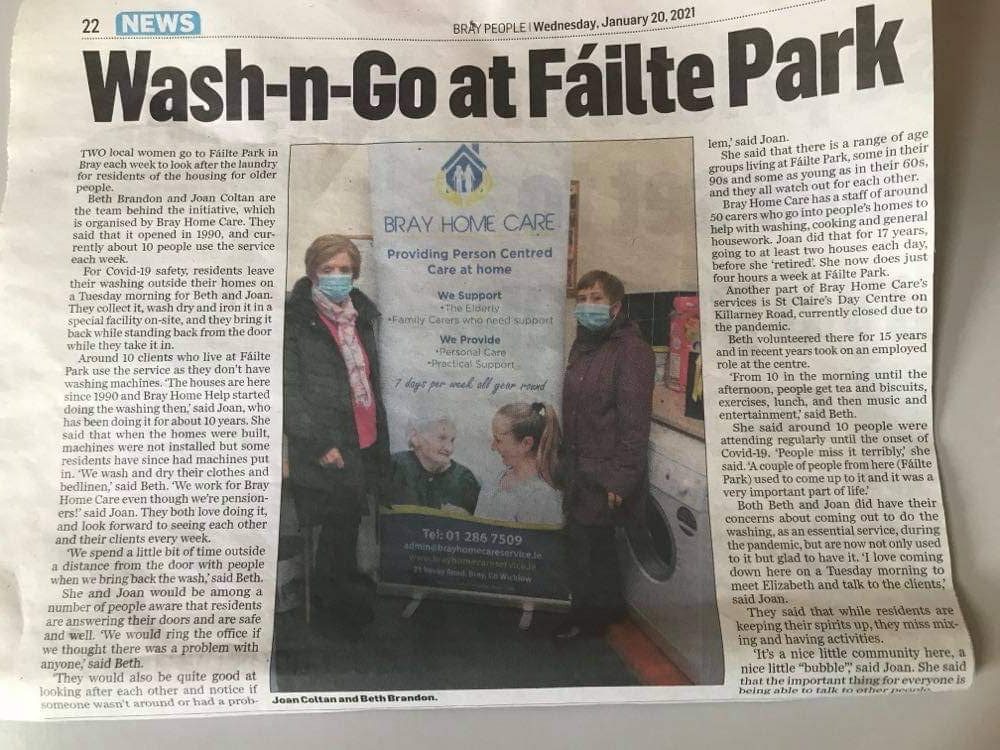 TWO local women got to Fáilte Park in Bray each week to look after the laundry for residents of the housing for older people.

Beth Brandon and Joan Coltan are the team behind the initiative, which is organised by Bray Home Care. They said that it opened in 1990, and currently about ten people use the service each week

For Covid-19 safety, residents leave their washing outside their homes on a Tuesday morning for Beth and Joan. They collect it, wash dry and iron it in a special facility on-site, and they bring it back while standing back from the door while they take it in

Around ten clients who live in Fáilte Park use the service as they have washing machines. The houses are here since 1990 and Bray Home Help started doing the washing then’ said Joan, who has been doing it for about ten years. She said that when the homes were built, machines were not installed but some residents have since has machines put in. ‘We wash and dry their clothes and bedlinen,’ said Beth. ‘We work for Bray Home Care even though we’re pensioners!’ said Joan. They both love doing it, and look forward to seeing each other and their clients every week.

‘We spend a little bit of time outside a distance from the door with people when webring back the wash.’ Said Beth.

She and Joan would be among a number of people aware of that residents are answering their doors and are safe and well. ‘We would ring the office if we thought there was a problem with anyone,’ said Beth

‘They would also be quire good at looking after each other and notice someone who wasn’t around or had a problem,’ said Joan

She said that there is a range of age groups living at Fáilte Park, some in their 90s and some as young in their 60s and they all watch out for each other.

Bray Home care has staff of around 50 carers who go into people’s homes to help washing, cooking and general housework. Joan did that for 17 years, going to at least two houses each day, before she ‘retired’. She now does just four houses a week at Failte Park.

Another part of Bray Home Care’s Services is St. Claire’s Day Centre on Kilarney Road, currently closed due to the pandemic.

Beth volunteered there for 15 years and in recent years took on an employed role at the centre.

From 10 in the morning until afternoon, people get tea and biscuits, exercises, lunch, and then music and entertainment’, said Beth

She said around 10 people were attending regularly until the onset of Covid-19. ‘People miss it terribly’, she said. ‘A couple of people from here (Fáilte Park) used to come up to it and it was a very important part of life’.

Both Beth and Joan did have their concerns about coming out to do the washing, as an essential service, during the pandemic, but are now not only used to it but glad to have it. ‘I love coming down here on a Tuesday morning to meet Elizabeth and talk to the clients,’ said Joan.

They said that while residents are keeping their spirits up, they miss mixing and having activities.

It’s a nice little community here, a nice little “bubble”’, said Joan. She said that the important thing for everyone is being able to talk to other people

You can find out more about which cookies we are using or switch them off in settings.

This website uses cookies so that we can provide you with the best user experience possible. Cookie information is stored in your browser and performs functions such as recognising you when you return to our website and helping our team to understand which sections of the website you find most interesting and useful.

Strictly Necessary Cookie should be enabled at all times so that we can save your preferences for cookie settings.

If you disable this cookie, we will not be able to save your preferences. This means that every time you visit this website you will need to enable or disable cookies again.